Henry IX and I, King and Cardinal: the Royal Stuart Bicentenary Requiem 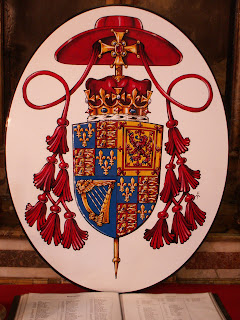 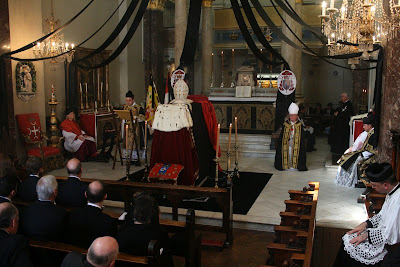 Setting the standard for all future Requiems and Solemn Masses!

This was the Solemn Pontifical Requiem for Prince Henry Benedict Stuart, the Cardinal Duke of York and, by right, King Henry IX of England and I of Scotland and Ireland.

The pontificating bishop was Bishop Bernard Longley, titular Bishop of Zarna, Auxiliary Bishop in Westminster supported by an all-star cast of clergy familiar with the traditional Roman rite, including the preacher and Subdeacon, Fr Nicholas Schofield, Honorary Chaplain to the Royal Stuart Society which sponsored the whole event.

On the right of the picture is Fr Bede Rowe who is such a superlative amateur milliner (hat-maker) that he made the Cardinal's galero that sits on top of the catafalque in the middle of the sanctuary. What an outstanding feat of hat-making!

Here is a close up of Fr Bede with his superb galero: 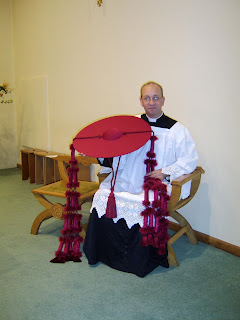 The galero was worn by cardinals in the Middle Ages and gradually added more and more tassels and then was no longer worn. It was worn at the creation of a cardinal by the Pope and, after the death of the recipient, it was hung over his tomb until it disintegrated to remind the people of the transitory nature of fame in this life.

The Requiem took place in the Conventual church of the Sovereign Military and Hospitaller Order of St John of Jerusalem, Rhodes and Malta (founded in 1099 and later known as the Knights Hospitaller). This is not - as some wrongly call it - a "hospital chapel". This is the Conventual church of an ancient religious order, older than the Franciscans and Dominicans and most other religious orders in the Church - only the Benedictines and Augustinians are older.

Here, below, is the church prepared for the Requiem. 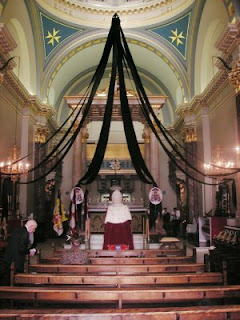 The catafalque is in the middle of the Sanctuary, standing on a black carpet. Black hangings are attached to a coronet suspended from the cupola windows to match the black altar frontal and black vestments used in the old rite for Requiems and funerals. Six candlesticks stand guard by the catafalque. The arms of the Cardinal-King are displayed attached to the altar pillars. In the Order flag-stand are seen the papal flag, the flag of the Order and the Union flag.

This latter has been, since 1801 and the union with Ireland, the flag of the United Kingdom and Great Britain. The Stuart monarchy did not use it but only the pre-1801 Union flag which did not have the red Saltire of St Patrick and looked like this: 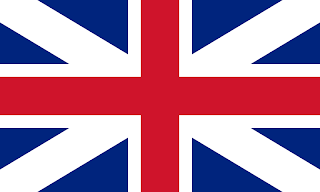 Here below is the catafalque closer up. At the front of it, placed on a red cushion, are representations of the Order of the Garter regalia but of the type used by the Stuarts. The Stuart Garter star was diamond-encrusted which the Hanoverian Protestants replaced with cut metal only. The Stuart Garter sash was a lighter blue, the Hanoverians changing to a darker colour to distinguish themselves from the Catholic Stuarts. The Garter collar with the pendant image of St George killing the dragon, and the Garter itself with its famous motto, Honi Soit Qui Mal Y Pense, are also represented.

The motto means "evil be to him who thinks evil of it" and refers to the chivalrous incident by which the Order of Knights of the Garter was initiated. King Edward III about 1348, whilst dancing at Eltham Palace, picked up the garter of the Countess of Salisbury which caused some sniggering as if there were some impropriety. The King, seeing this, said the words that are now the Order's motto, as if to mean "if you think ill of this lady's reputation assuming she lost her garter through improper behaviour, then evil be to you". So the Order was founded upon the chivalrous defence of a lady's honour by the King himself, a Catholic king.

Since St George had become the Protector of the English Realm, through his having inspired King Richard the Lionheart in the Crusades, King Edward dedicated his new order of Knighthood to that warrior saint.

Even today the Order of the Garter is still given by the Monarch in the way it has always been given, in the name of "God, our Lady and St George". 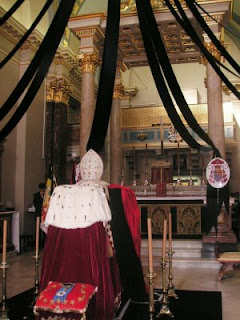 Draped on the catafalque is a representation of the Royal parliamentary mantle which is burgundy-coloured with an ermine cape. At the altar end is the galero sitting on top of the cappa magna of a cardinal, the long scarlet train that is worn on solemn occasions. 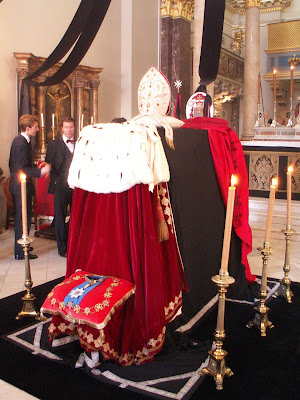 In the middle of the catafalque on a white cushion sits a mitra pretiosa or precious mitre. At a Requiem the pontificating bishop wears a simple white mitre, not a precious mitre. 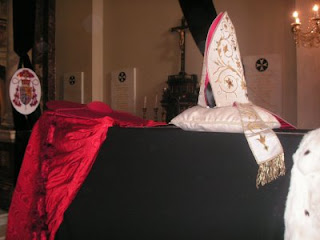 Below, Fr Nicholas Schofield preaches the sermon about the Cardinal-King. The text of the sermon is on his website at http://romanmiscellany.blogspot.com/. 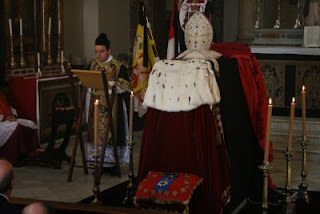 Below, in their stalls sit the Knights of Malta, praying and singing the Dies Irae alternately with the schola of some 23 singers. The schola sang from behind the altar which produced a wonderful effect as of hidden angels pouring forth chant and polyphony for the soul of the Cardinal-King and the deceased members of his family. 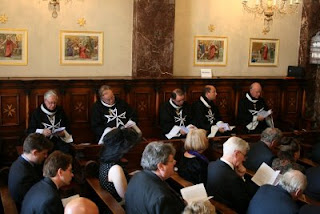 Here below the Bishop performs the Absolutions. As the schola sings the Libera Me the Bishop blesses the catafalque with lustral water and then incense. 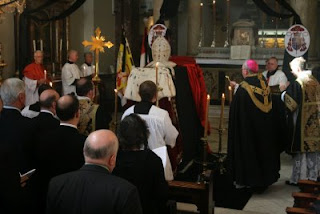 The Bishop then processes out, preceded by the clergy and servers with his mitre-bearer and other servers behind, imparting his blessing as he goes. 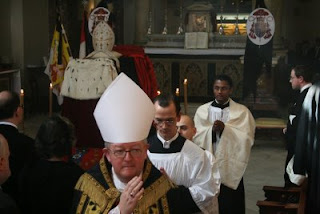 Below is a representation of the funeral of Prince Henry's mother, Queen Maria Clementina, the daughter of King Jan III Sobieksi of Poland-Lithuania.

Finally, here is the portrait of the Cardinal-King hanging in the Scots College in Rome, where Scottish seminarians are trained for the priesthood.

Thus was appropriately celebrated the memory of the Head of the Royal House of Stuart and rightful King over the Dowry of Mary, England, the Crown of Mary, Scotland, and the blessed isle of St Patrick, Ireland, the last of the Royal name of Stuart that had ruled in Scotland for so long and which later came to be the ruling dynasty of the British isles, the last Catholic dynasty of these islands.

The Stuart line, happily, continues and, having passed down through various generations, now rests with HRH Prince Francis, Duke of Bavaria.

His brother, Duke Max Emmanuel in Bavaria, will succeed and thereafter the daughter of Duke Max, Princess Sophie of Bavaria, now Her Serene Highness, Princess of Liechtenstein after her marriage to HSH Prince Alois, the heir of the very Catholic princely line of Liechtenstein. Appropriately, Prince Alois was educated at the Royal Miltiary Academy Sandhurst, Britain's military academy, and his eldest child was, again appropriately, born in London.

Here is a portrait of the Princess with her husband at the 200th anniversary of the Principality of Liechtenstein which was acquired by the Liechtenstein family when they were a substantial land-owning noble family in Austria, Bohemia, Moravia and Silesia. They held Liechtenstein directly (unmittelbar) from the Holy Roman Emperor and so thereby qualified to sit independently in the Reichstag (Imperial Diet), the Parliament of the Holy Roman Empire (not to be confused with the later Parliament of the same name in the Protestant German Empire). They were great friends and honoured courtiers of the Habsburg Roman Emperors. However, all their lands, save Liechtenstein, were later seized by the Communists and they now head only the Principality which is still technically a fief of the Holy Roman Empire, the last such fief in Europe.